The HOYA Code of Conduct stipulates the basic guidelines to be complied with when performing operations based on the Corporate Mission and values of the HOYA Group. The Code of Conduct clarify that basic human rights are to be respected and that all forms of discrimination and harassment in connection to race, nationality, gender, religion, belief, birthplace, age, or disabilities are to be eliminated in all corporate activities. We aim to create a safe and healthy workplace that allows employees to feel secure while they work. The Company will provide equipment, systems, and working conditions so that each and every employee respects and cooperates with each other as the Company strives to create a workplace that is easy to work in.

The HOYA Code of Conduct is guidelines for all officers and employees of the HOYA Group to execute operations in the right way in accordance with the philosophy and values set out in its Corporate Mission and Management Principles. Having translated the HOYA Code of Conduct into 27 languages in consideration of the circumstances of the Company, which operates businesses on a global scale, we are making the content thoroughly known within the Group by such means as making employees do a read-through in the Group to which they belong once a year and conducting online education and verification tests.

The HOYA Code of Conduct clearly states that the diverse values, individuality, and privacy of individuals are to be respected and clearly prohibits discretionary language, acts of violence, sexual harassment, and power harassment in connection to race, nationality, gender, religion, belief, birthplace, age, or disabilities.
Activities to promote the awareness of the Code are conducted through means such as training classes in Japan.

2. Establishment of an employee whistleblowing and consultation system

As part of our internal control systems, the HOYA Group established the HOYA Help Line in 2003 as a whistleblowing and consultation system for the Group. This is a framework that protects whistleblowers when there have been violations of laws, regulations, or the HOYA Code of Conduct so that problems can be known at an early stage and smoothly communicated to top management in an aim to ensure the soundness of the entire Group through quick and appropriate responses to such issues. We have been creating an environment in which advice can be sought easily, including establishing an external point of contact, accepting whistleblowing complaints and consultation requests 24 hours a day on the Web, and allowing anonymity. 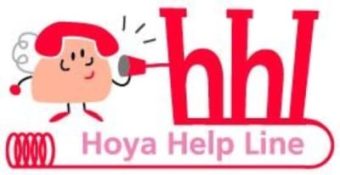 In accordance with the UK Modern Slavery Act 2015 legislation, the HOYA Group publishes a statement on the steps it has taken to identify and eradicate slavery and human trafficking within its business and supply chains.

The HOYA Group promotes sales and production at optimal locations on a global scale in diverse businesses. In this context, the diversity of human resources in the Company is our strength as well as our driving force for sustained value creation. HOYA believes that by respecting and accepting diversity and proactively taking advantage of the “differences,” we can flexibly adapt to the ever-changing business environment and meet diversifying customers’ needs, and thereby bring about higher corporate value.

HOYA has long been recruiting personnel based on their individual capabilities, regardless of their nationality, gender, etc. Over 90% of our employees work in locations outside Japan. By proactively promoting talented local employees to top management positions and giving them more opportunities, we have been pursuing globalization of the Group as a whole, resulting in the percentage of non-Japanese nationals in top management positions at overseas subsidiaries exceeding 90%. Going forward, HOYA will continue to provide equal opportunities to many competent personnel.

In 2014, we launched the “Minkatsu” diversity project for the purpose of creating a work environment in which each and every employee can feel a sense of fulfillment from work and play an active role by fully demonstrating his/her ability. As part of the “Minkatsu” diversity project, we are working to increase the proportion of female employees and female leaders*.
※Female leaders: Subsectional chief equivalent to or above section and highly skilled professionals

※The survey method is different from the previous survey as the scope of the survey was expanded with respect to overseas employees.

Proportion of Female Employees and Female Leaders in Japan 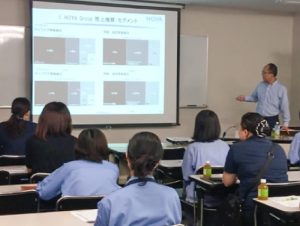 We do not discriminate based on gender in hiring, promotions, or pay increases, and instead focus on actively employing human resources with highly specialized capabilities and morals. In addition, one of the independent directors is a woman (16.7% of total directors).

Despite having promoted the “Minkatsu” diversity project by setting our target at making female leaders in Japan account for 10% or higher by March 31, 2018, we fell short of meeting the target at that point in time. We are promoting activities based on new targets that we have set again, i.e., making female leaders and female employees in Japan account for at least 15% and 30%, respectively, by April 2023. The proportion of women is steadily increasing, and going forward, we will continue to engage in initiatives from the viewpoint of expanding the recruitment and occupational fields of women and improving the workplace environment/culture, as well as holding career advancement seminars and cross-divisional exchange meetings targeted at female employees, among others.

Business divisions are making efforts to develop the necessary environment, systems and culture tailored to their respective businesses.

By developing an environment in which diverse personnel can play an active role by demonstrating their capabilities and systems that enable workstyles with higher productivity and efficiency, we will strive to strike a balance between realizing the sense of fulfillment from work as well as personal life and enhancing corporate value.

The HOYA Group actively utilizes people with disabilities, for example in the operation of its Ichikawa Challenge Office that supports eco projects. 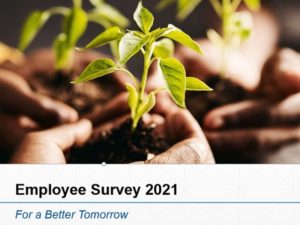 In order for the workplace—i.e., “HOYA”—to be a “field” in which individuals can undergo further growth while “actions demanded” by the Company are demonstrated by employees on an individual basis, we believe that it is important for both employees and the Company to make efforts to pursue the ideal workplace by identifying the areas in need of improvement through engagement surveys. The Company conducts an employee engagement survey covering the entire Group once a year. The response rate for the survey conducted in March 2021 was 96%.

We believe that by taking such actions, the creation and innovation of new values and frameworks will be facilitated, and that the growth of individuals will translate into the growth of businesses and the Company as a result.

In response to the survey results, discussions are held at each workplace, and based on a deeper understanding of the results, areas in need of improvement are identified and reflected in action plans.

This browser will not be covered by the display operation guarantee.
To view the HOYA site, please switch to a supported browser.
After 2022, the browsers recommended for viewing and operation on Windows 10 are as follows.